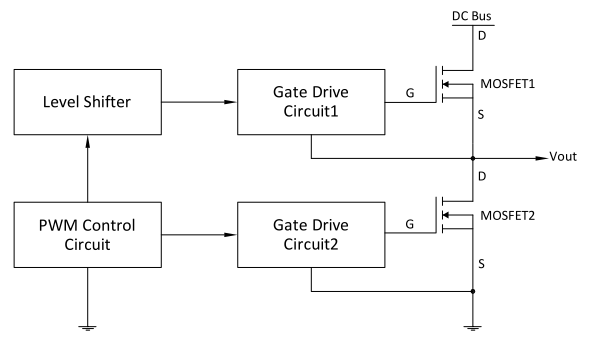 Power MOSFETs and IGBTs are used extensively in electrical and electronic applications for their high switching speed and thermal performance. However, due to the inherent voltage drop across these devices (breakdown voltage of the junction between semiconductor material), they cannot be driven directly from a gate signal without causing damage to the transistor as well as loss of performance.

Isolated gate drivers solve this problem by providing an isolated voltage source to the gates of power semiconductors which drives a robust power MOSFET or IGBT transistor, while also protecting it from potentially destructive high voltages and currents which might otherwise be present at the load side of the device.

The gate driver’s principal function is to enhance the current delivered to the gate of the transistor under control. This is necessary to achieve the quick switching times found in switching power electronic converters.

Aside from current amplification, the gate driver frequently incorporates extra functions required by the application. These are some examples:

In other words, using an isolated gate drive to drive MOSFET or IGBT devices reduces voltage losses in the load circuit, increases the high-side switch’s switching speed and thermal performance, while also protecting the load.

The most commonly known type of isolated gate drivers are optocouplers. In recent years,  the use of coupling technologies such as magnetic gate drivers and capacitive gate drivers were also introduced in the market.

The following are the distinctions between optocouplers, magnetic gate drivers, and capacitive gate drivers:

Optocouplers use thick insulation made of silicone and polyimide tape on both ends of the optical channel. A minimum distance through insulation (DTI) of 0.08 mm is required. Magnetic isolators are constructed with monolithic CMOS ICs and insulated with a thin layer of spin-on polyimide. Their DTI is 0.017mm. Similarly, capacitive isolators on CMOS ICs are insulated using a thin layer of SiO2 with a minimum DTI of 0.008 mm.

To handle a larger insulation voltage, several manufacturers have recently extended the DTI to 16 μm. However, DTI’s ability to expand further is constrained by the following factors:

For the same working voltage, the electric field stress in magnetic and capacitive technology is at least 20X that of an optocoupler. This difference is significant, implying that a new aging mechanism and fault screening approach must be established and created.

The partial-discharge method is used to test the homogeneous quality of solid insulation. This test not only ensures high-quality insulation, but it also successfully eliminates devices with manufacturing flaws, which would result in shorter lifespan and safety hazards.

The aging mechanism of magnetic and capacitive technology might differ depending on the material used for insulation. The insulation layer in magnetic isolators is made of spin-on polyimide. A thermodynamic model should used by manufacturers to predict the lifetime of a product. Because capacitor isolators use SiO2 as insulation, a TDDB (Time Dependent Dielectric Breakdown) model should be employed to determine lifetime.